The purpose of this exhibition is to explore perceptions of the city on a global scale. Artists are invited to reflect current cultural, social and political subjects through engagements with the built environment in which they live and / or work. The exhibition is the result of an open call for submissions, and works have been received from artists working in Ireland, Sweden, UK, Portugal, Lithuania, Denmark, Italy, Sweden, USA, Austria, Israel, Romania, Germany, and Qatar. A conference will take place alongside the exhibition at Hanover Project, where speakers will present themes central to the exhibition concept.

Travelling is an odd experience in the 21st Century. As one steps off a plane and heads towards a city, one is confronted with a familiar scene. There are a few relics from a distant culture, a few touristy spots for the ‘selfies’. But increasingly present are the generic office tower blocks and shopping malls – McDonalds, H&M, Lidl – the same lattes, fashion trends and boutiques. In cities such as Berlin, you cannot ignore the word gentrification as old buildings and autonomous establishments disappear to make way for more shopping malls, flash apartments and expensive bars.

Globally, urbanity is changing radically. In the UK, traditional and historic markets are being turned in to expensive artisan trade fairs and unique independent shops are being replaced with generic chain stores. The city is increasingly a playground for the wealthy, yet economically the West in particular is in global financial turmoil. As late capitalism persists and growth continues beyond its means, individuals are increasingly suffering through job and service cuts alongside an increase in living costs.

All of these issues are imprinted onto the city through increasing evidence of affluence and depravity, and in the signage, buildings, bureaucracy, people, history, moments and actions that surround us. In this exhibition, works will collectively capture the impact of globalization as reoccurring themes are unearthed, whilst providing engaging dialogues between differing viewpoints. IN THE CITY

Victoria Lucas (b. 1982) is a Sheffield based artist who works at the University of Central Lancashire in Preston as a Fine Art lecturer. She graduated from a Fine Art Sculpture Degree in 2004 from Norwich University of the Arts, and in 2007 she was awarded a MFA Fine Art Degree from the University of Leeds. Her artwork has been exhibited internationally, including a recent solo show at Grizzly Grizzly in Philadelphia, and group shows at Casa Maauad in Mexico City and Bolsky Gallery in Los Angeles. She also co-ordinates Hanover Project, a contemporary art gallery in Preston. Lucas’ works can be described as a series of considered and poetic interactions with objects and places. Focusing on urban public spaces that frame the everyday, works punctuate the ordinary so that relatively minor happenings are revealed as monumental events. This exhibition forms part of Lucas’ research profile at the University of Central Lancashire.
http://www.victorialucas.co.uk
http://www.axisweb.org/p/victorialucas

Visiting Speaker Jonn Herschend (US) is an interdisciplinary artist, filmmaker and experimental publisher preoccupied with how emotional confusion, absurdity and veracity play out in the realm of the everyday. His work has been exhibited nationally and internationally including Den Frie Centre of Contemporary Art in Copenhagen, Denmark, the San Francisco International Film Festival, the Stuttgarter Filmwinter Film festival, The Mattress Factory in Pittsburgh, the 2012 SITE SANTA FE Biennial, and the 2014 Whitney Biennial in New York. He is the cofounder and co-editor, along with Will Rogan, of the experimental publication THE THING Quarterly, and is a recent recipient of a Danish Arts Council grant for his work as co-curator, along with Heidi Hove, of the Deadpan Exchange international exhibition series. He has been a visiting lecturer at the University of California Berkeley, San Francisco State University, California College of Art and Stanford University. He lives and works in San Francisco, California (US).
http://jonnherschend.com/ Visiting Speaker

Heidi Hove (DK) is an interdisciplinary artist. Her conceptual and often site-specific artwork includes objects, installations and interventions highlighting the contradictions present in the absurd and mundane of daily life. She has exhibited her works in various contexts nationally and internationally such as The Turku Biennial 2013 (FI), West Chicago City Museum (US), and The Art Laboratory Berlin (DE). Besides that, she has produced a number of public artworks including a giant light sculpture in the desert in Texas (US). In 2012 and 2013, she was rewarded a working grant from the Danish Arts Foundation and also nominated as the winner of the Turku Biennial 2013. Besides her individual practice, Heidi has been involved in different curatorial projects. She co-curated, along with Jens Axel Beck (DK) the award-winning exhibition ‘Lokal Global Plan’ in the public space of Vanløse (DK) in 2011 and since 2007, she is co-curating the international Deadpan Exchange series with Jonn Herschend (US). Furthermore, she is co-founder of the artist initiatives, The Berlin Office from 2006-10, Koh-i-noor from 2004 and Sydhavn Station from 2012. She currently lives and works in Copenhagen (DK).
http://www.heidihove.com/ 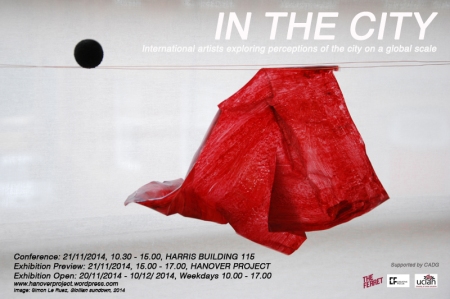